This Shavuos marks the 70th anniversary of the destruction of the Hungarian Jewish communities. By this time, most of Polish  Jewry and the rest of  Eastern European Jewry were already annihilated and the Hungarian deportations to Auschwitz were at their peak. We are intent on spreading awareness of the significance of the Av Harachamim tefillah that is part of the public Yizkor on the Shalosh Regalim. To properly commemorate those communities that were destroyed al KIddush HaShem let us reinforce the respectful approach, seize this eis ration, and wait for all mispallelim, including those who have parents and traditionally leave the shul during Yizkor, to reassemble and then recite the meaningful Av Harachamim together with the proper kavanah that this communal Yizkor deserves.

Did you know that Av Harachamim was composed over 900 years ago after the bloody massacres of the Crusades and was originally only recited on the Shabbos before Shavuos? It is one of the most powerful tefillos, commemorating the sacrifices of the kedoshim and, honoring the men, women and children who preceded us and enabled our Jewish survival. It eventually became popular to recite it every Shabbos (except on a “festive” Shabbos whenTachanun would not be recited if it were a weekday or when there’s a special event such as Birchas HaChodesh).

During the Sefirah period – when most of the crusade massacres actually occurred, as well as subsequent tragedies such as the Tach V’Tat Pogroms, and in recent times the destruction of Warsaw ghetto and the massacre of Hungarian Jewry – in almost all Shuls Av Harachamim is always recited.

Let us join together at this auspicious time to commemorate the Kedoshim with a communal Av Harachamim recited in unison at the end of Tefilas Yizkor.

This awareness campaign is being co-sponsored by the Orthodox Union, National Council of Young Israel and International Young Israel Movement.

Click Here to Print the Poster for your Shul 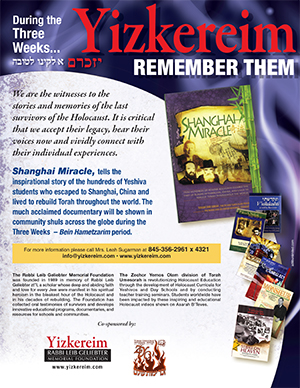